Home  > NEWS  >  Does high voltage really mean poor cycle performance? I do not think so

Does high voltage really mean poor cycle performance? I do not think so 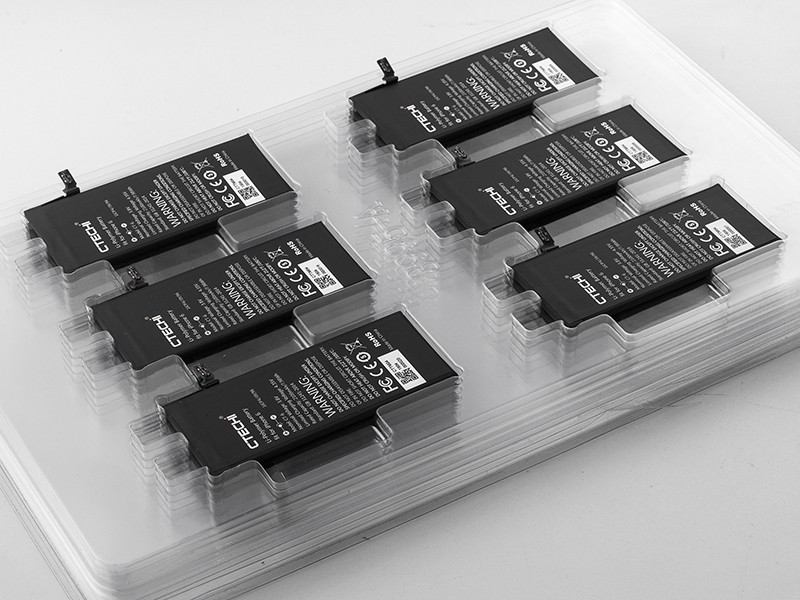 In recent years, in order to meet the growing demand for high energy density of lithium-ion batteries, positive materials are also moving in two directions:

2) High voltage, voltage increase on the one hand can increase the capacity of the material, on the other hand can also improve the material voltage platform. However, with the improvement of charging voltage will also lead to the stability of positive material / electrolyte interface, causing the increase of side reactions, seriously affecting the circulation performance of lithium-ion batteries, in order to solve the problem of poor stability under the high voltage of the three-way material, surface cladding, single crystal and electrolyte additives are the most commonly used methods.

Recently, EunJi Park and Kuk Young Cho of Hanyang University in South Korea added vc and sulfur-based compounds in the electrolyte, BDTT significantly improves the cycle performance of NMC532/graphite batteries at high voltage (4.5V) and reduces the increase in impedance and polarization. 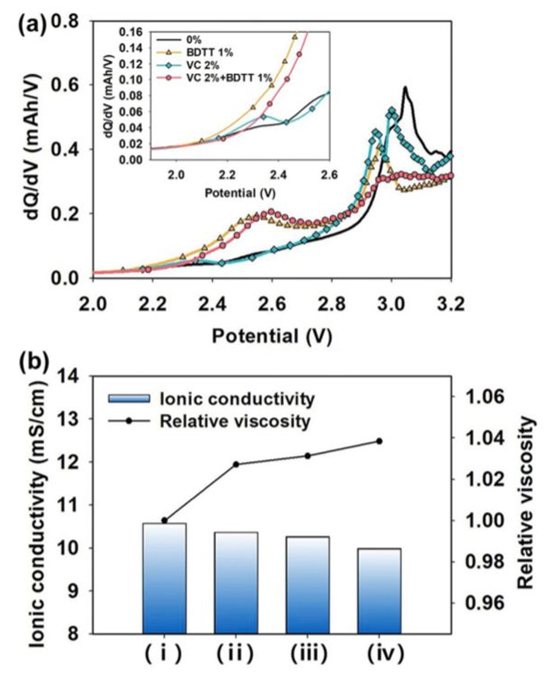 The following image shows several different additive electrolyte batteries at 2.7-4.5V (vs Li/Li The 0.5C cycle curve in the range, from the figure below a can see that the increase dying cut-off voltage significantly increased the gram capacity of the NMC532 material, adding BDTT NMC532 material gram capacity reached 169.3mAh/g, higher than the blank electrolyte control group 167.3mAh/g, After 200 cycles, the battery capacity retention rate of adding BDTT and VC is 11.9% higher than that of the blank group, while the improvement of The cycle performance of BDTVC additives for lithium-ion batteries is more obvious at 60 degrees C (as shown in Figure b below), The EunJi Park thinks this is mainly due to the formation of a stable interface film in the positive pole of BDTT, while VC forms a stable interface film on the negative surface. 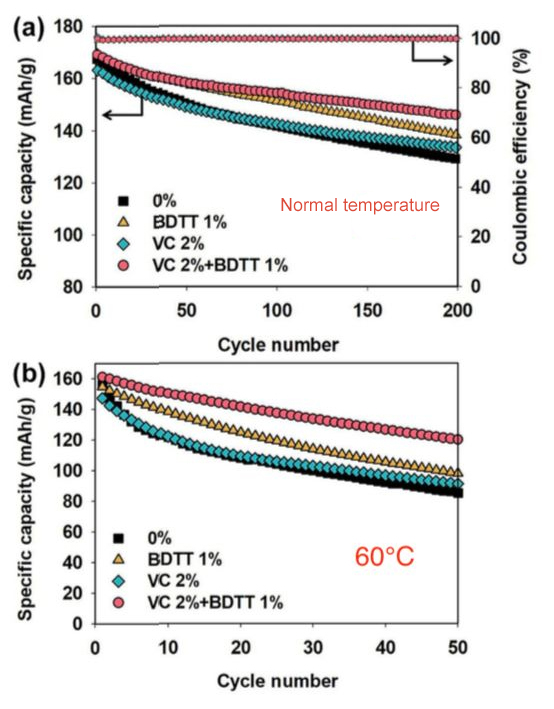 The following image shows the charge and discharge voltage curve of different electrolyte batteries in 1, 50, 100, 150 and 200 cycles, from the figure below a can see that the battery without additives discharge voltage curve in the cycle rapidly decay, while the discharge voltage decrease during the battery cycle after the addition of BDTT is significantly reduced. This shows that the addition of BDTT can effectively suppress the side reaction of the positive interface and reduce the increase of the positive interface impedance, thereby reducing the voltage decay of the battery during charge and discharge.

At the same time, we can compare the voltage difference in the charging and discharge process, so as to analyze the polarization size of the battery, from the following image can be seen to add VC BDTT additives after the battery polarization significantly reduced, which shows that VC and BDTT added can stabilize the positive and negative interface at the same time, thereby reducing the polarization in the charging and discharge process. 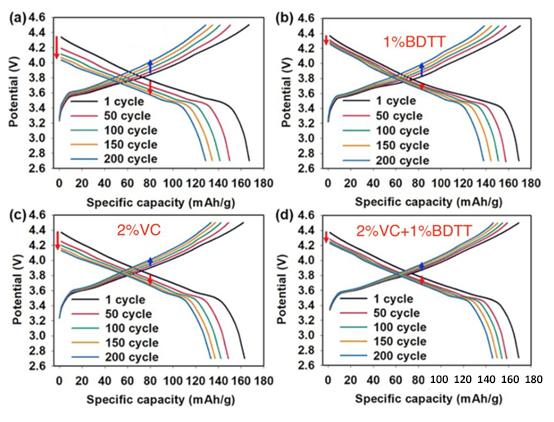 AC impedance is the most effective and intuitive method to analyze the inter-ionia interface impedance, the following image is the AC impedance data of batteries using different electrolytes, from which we can see that the AC impedance map of these batteries is mainly composed of two semicircles, of which the semi-circle in the higher frequency range mainly reflects Li Li Through the impedance Rf of the SEI membrane, the semi-circle of the low frequency zone mainly reflects the charge exchange impedance rct, from the figure below a can be seen in the first cycle of the battery containing additives sseidura SEI membrane impedance is significantly higher than the blank control group, which is mainly due to the additive stort interface to form a more stable SEI membrane, But we looked at the AC impedance map after 200 cycles (below b) and found that the battery charge exchange impedance Rct without additives showed a significant increase, much higher than the battery containing BDTT additives, mainly because BDTT can form a protective layer on the positive surface. This reduces the side reaction of the positive surface at high voltage. 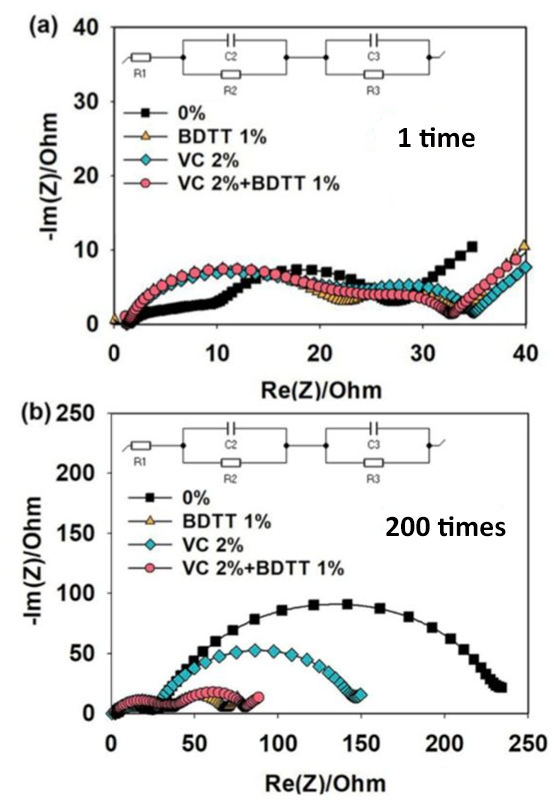 In order to further verify the above inference, the EunJi Park analyzed the elements of the NMC532 positive surface after 200 cycles using XPS tools, and in the C1s diagram, the feature peak of PVDF is near 284.8eV, which we can find by comparing the batteries using different electrolytes. The high peak strength of the battery 284.8eV with BDTT electrolyte shows that BDTT can effectively reduce the decomposition of the electrolyte on the positive surface, thus obtaining a thinner interface film. 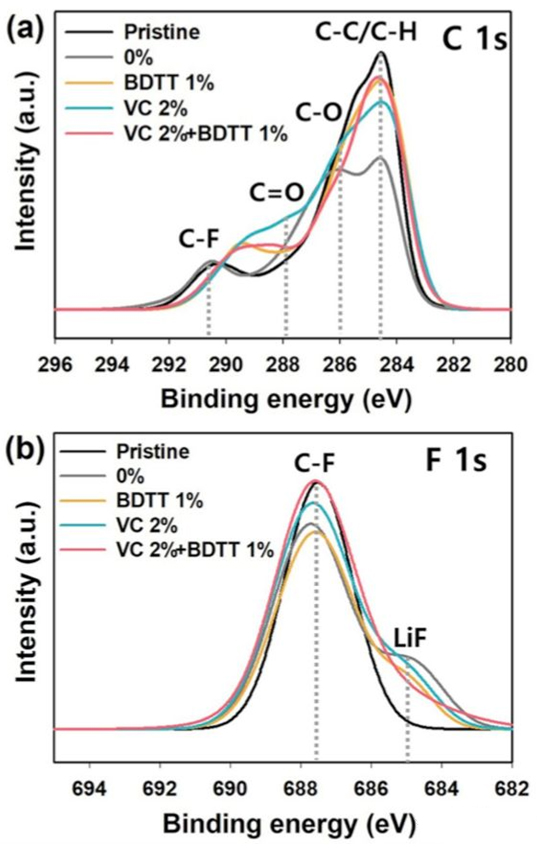 High voltage is an important direction for the development of lithium-ion battery positive materials in the future, Eun Ji Park's research work shows that the S compound BDTT can form a stable interface film on the positive surface, inhibiting the decomposition of electrolyte on the positive surface, thereby significantly improving the circulation stability of NMC532 material slower at high voltage. In particular, when used with VC, the cycle performance of NCM/graphite batteries can be significantly improved.